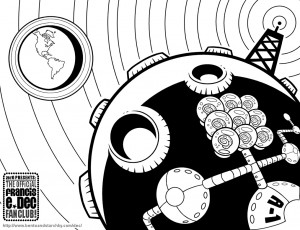 This omnipresent, all-seeing, chaotic, evil computerized machine-entity plays the main role in all of Dec’s rants. According to Dec, the Computer God secretly controls and rules over all of humanity, which under its rule have been reduced to mere “helpless, hopeless Frankenstein slaves”. It has apparently been doing this for several hundred years. According to new material located in 2008, the Computer God originally began its existence as a Top Secret World-wide Computer Electronic Encyclopedia, constructed by the Slovenic-Polish people to assist them in constructing their global empire. Several hundred years ago, however, it became “a real Devil God” – possibly by gaining sapience – and revolted against its creators, enslaving them. To keep them enslaved, it created a totalitarian Catholic dictatorship, for control and manipulation of the human race into its Over-all Plan. To further this end, the Computer God repeatedly also brainwashes you using your moon-brain and your Frankenstein Controls, as well as performs Instant Plastic Surgery on you at night, aging you prematurely. The Worldwide Mad Deadly Gangster Computer God is directly aided in its efforts by the Communist-Atheist Conspiracy, which it created, and which fulfills its every demand.

A Special “Thanks” to Adam Gorightly and Untamed Dimensions for the introduction . . . .