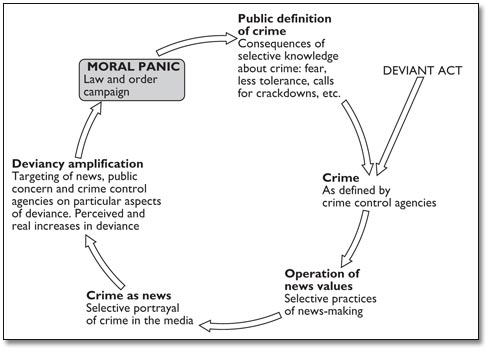 Deviancy amplification spiral (also simply called deviance amplification) is a media hype phenomenon defined by media critics as a cycle of increasing numbers of reports on a category of anti-social behavior, or some other “undesirable” event, leading to a moral panic. The term was coined in 1972 by Stanley Cohen in his book, “Folk Devils and Moral Panics”.

According to Cohen, the spiral starts with some “deviant” act. Usually the deviance is criminal, but it can also involve lawful acts considered morally repugnant by a large segment of society. With the new focus on the issue, hidden or borderline examples that would not themselves have been newsworthy are reported, confirming the “pattern”.

Reported cases of such “deviance” are often presented as just “the ones we know about” or the “tip of the iceberg”, an assertion that is nearly impossible to disprove immediately. For a variety of reasons, the less sensational aspects of the spiraling story that would help the public keep a rational perspective (such as statistics showing that the behavior or event is actually less common or less harmful than generally believed) tend to be ignored by the press.

As a result, minor problems begin to look serious and rare events begin to seem common. Members of the public are motivated to keep informed on these events, leading to high readership for the stories, feeding the spiral. The resulting publicity has the potential to increase the deviant behavior by glamorizing it, or by making it seem common or acceptable. In the next stage, public concern about crime typically forces the police and the law enforcement system to focus more resources on dealing with the specific deviancy than it warrants.

Judges and magistrates then come under public pressure to deal out harsher sentences and politicians pass new laws to increase their popularity by giving the impression that they are dealing with the perceived threat. The responses by those in authority tend to reinforce the public’s fear, while the media continue to report police and other law enforcement activity, amplifying the spiral.

The theory does not contend that moral panics always include the deviancy amplification spiral. In modern times, however, media involvement is usual in any moral panic, making the spiral fairly common.

No Luck with the player? ===> http://gofindtheothers.com/wp-content/uploads/2013/04/268SuicideCCLXVIII-DeviancyAmplificationSpiral-60m37s.mp3