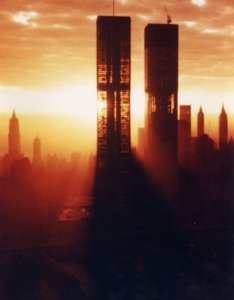 Every Great Magic Trick consists of three parts or acts. The first part is called “The Pledge”. The magician shows Us something ordinary: a deck of cards, a bird, a man – or Twin Skyscrapers. He shows Us this object. Perhaps He asks Us to inspect it to see if it is indeed real, unaltered, normal. But of course . . . . it probably isn’t. The second act is called “The Turn”. The Magician takes the ordinary something, and makes it do something extraordinary. Now We’re looking for The Secret . . . . but We won’t find it, because, of course, We’re not really looking. We don’t really want to know. We want to be fooled. But We wouldn’t clap yet. Because making something disappear isn’t enough; We have to bring it back. That’s why every magic trick has a third act, the hardest part, the part We call “The Prestige”.